Yesterday I received the RX888 designed by Justin Peng and Howard Su.

The first impression in opening the shipping package is that it is very small.   It is as big as the Cypress fx3 superspeed explorer kit ! 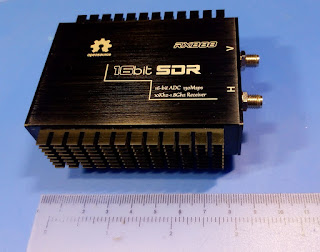 Thanks to Guy Atkins' SWLing post I was able to resist the desire to open it right away to see the interior.  I started looking at HF. I connected it to my old I7-3770 pc and to the 10 meters wire antenna that I have on the balcony of my house.  My city is Turin and here the local transmitter in MW has frequency 999000 Hz synchronized to a high precision reference.
I tuned this station and without calibration of the internal oscillator of R888 I measured an accuracy better than 1 ppm. This is not obvious after a transport of more than 10000 Km.
In case there is the internal trimmer that allows you to calibrate the reference oscillator when you have a reliable reference. 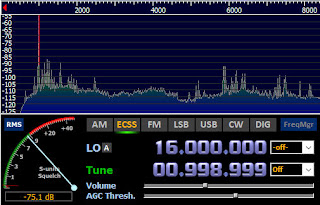 Frequency calibration test
The ExtIO_RX888.dll v0.4 has the gain scale calibrated without subtracting the 20 dB  LNA's gain to the input signal measurement.   In the calibration options of HDSDR I set a 20 dB loss that takes the LNA's gain into account 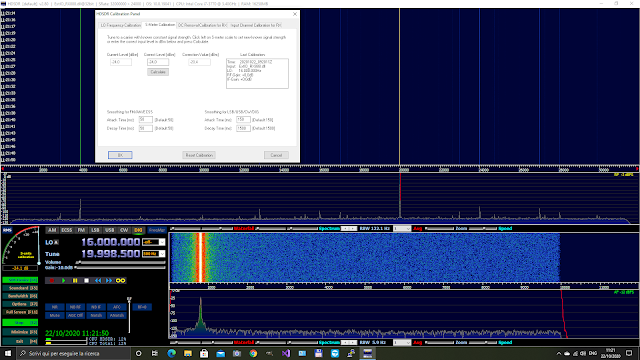 Calibrating gain with a 20MHz / - 24 dBm generator
To compare the gains I used  my 20MHz /- 24 dBm reference, used also in  measurement of noise figure .
I noticed that the third harmonic of my 20 MHz generator, 60Mhz is tilted at 4 MHz. I think this is due to the choice to use a wider HF input filter. You can notice other very low signals perhaps  due to the SI5351a, they are similar on my BBRF103.
With the amplitude scale calibrated to the input level I connected a 50 Ohm load to the input. 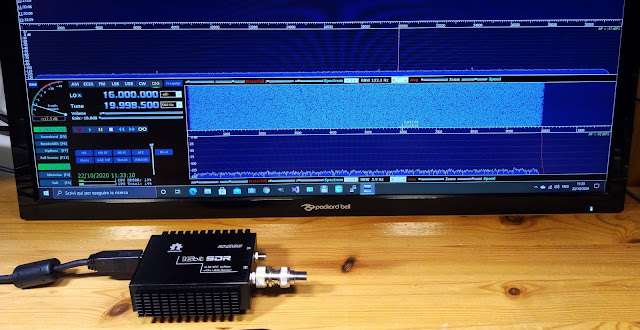 RX888 with Terminated Antenna input
Here is the resulting spectrum with the antenna terminated at 50 Ohm.
There are few spurious signals. 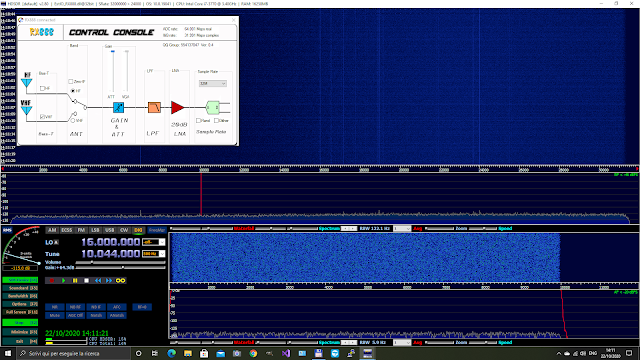 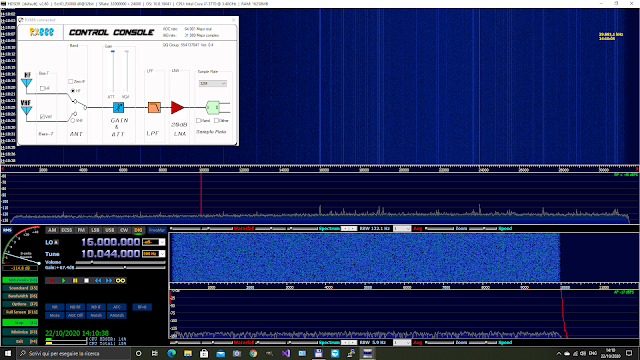 Open HF antenna input
The reception of the full HF spectrum in real time is spectacular. 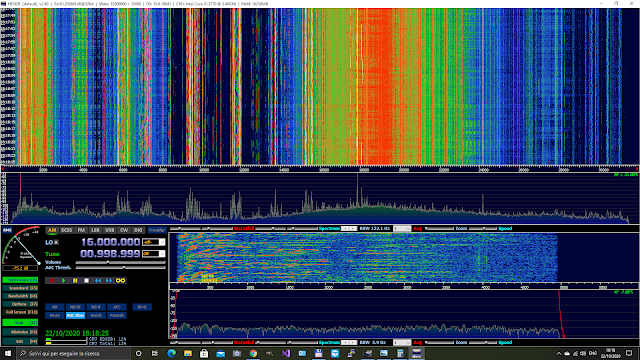 Full HF spectrum in real time
Here in Turin there are many very strong FM stations.
This is why I have noticed that the attenuation of the spectrum above 30 MHz is not sufficient to completely erase the interference from a local transmitter at 94,400 MHz which sampled at 64 MHz is received even at 94.400 - 64.000 = 30.400 MHz.  In case of strong local interference an external lowpass or FM notch filter may eliminate it. The little FM band interference may be present from 24 MHz (88 - 64 MHz) up.
On the other hand, the wider input filter will allow higher sampling rates to be tested. Up to 100 Msps using the current architecture. Higher up to 130 Msps using the full band of the ADC, as written on the container, if it will be possible to generate a GPIFII machine in the FX3 able to pack the samples at 32 bits.
As in BBRF103 the VHF reception with the R820T2 tuner is limited to 8 MHz band. I have no possibility to make serious instrumental measurements. I expect the performance to be comparable to a R820T2 dongle with the advantage of being able to process a wider band.
Here is a picture of 8MHz of the FM band. 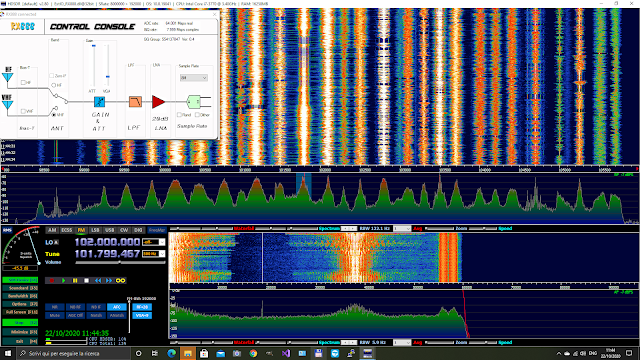 FM Band
Justin and Howard made a nice apparatus. Bravi! They integrated the FX3014 into a single PCB. They used an LNA to improve the noise figure. They have eliminated a switching power supply to reduce power supply noise.
The mechanics are nice and the cooling system is effective and quiet. The box reaches 45°C after 1 hour use at 20°C room temperature. The weight is 165 grams.
They modified the ExtIO.dll software and the dll dialog box has been changed to simplify the GUI. The current version is v0.4.
In the Franco Venturi's group  Next Generation Software Defined Radios (SDRs) .
There will be interesting evolutions of this architecture both in the Linux and Windows world.
RX888 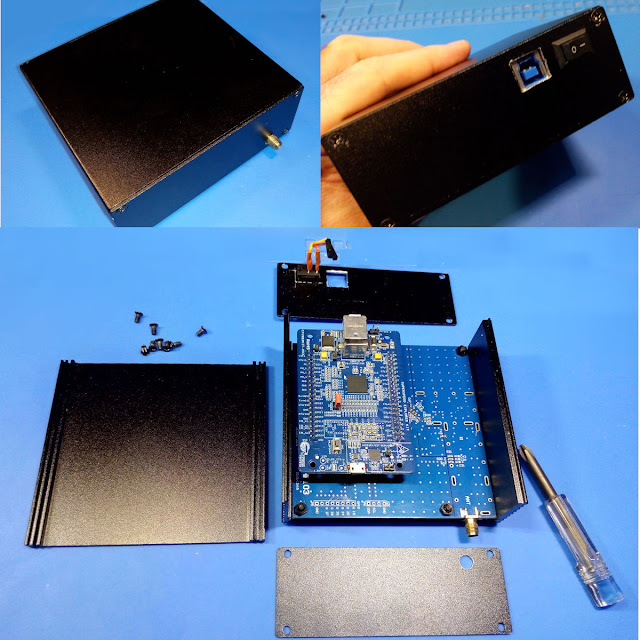 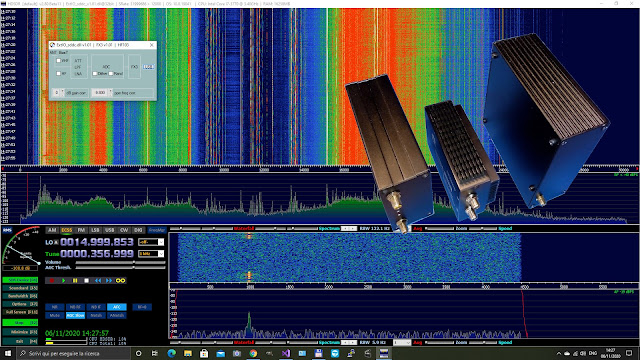